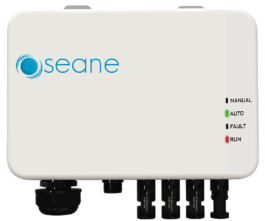 What is Photovoltaic PID?

PID (Potential Induced Degradation) is a phenomenon that occurs on most photovoltaic solar panels and is favoured by transformerless inverters. This phenomenon reversibly degrades the solar cells.

As a result, solar panels do not provide the expected 20-year yield. Degradation due to PID usually occurs after 2-3 years of operation.

Many factors are responsible for this phenomenon, but the main ones are the lack of watertightness of the panels and the use of transformerless (TL) inverters.

When the panels are under high voltage, ion migration occurs in the different layers that make up the solar cells. Electrons are attracted to the aluminium frame of the panels, which are themselves connected to earth. In addition to the loss of performance of the solar power plant due to these leakage currents, the PV cells are also subject to degradation (polarisation), which leads to a further reduction in energy yield.

The Oseane LKPID Anti-PID box is designed to prevent solar panels from losing energy due to PID. It connects in parallel with the inverter to generate a high voltage (with very low amperage) between the negative electrode of the DC string and the ground of the panels. During the night, it therefore frees the panel from the charge accumulated during the day due to the negative polarization between the negative electrode and the ground, allowing the repair of damaged panels.

The Oseane LKPID Anti-PID box is the solution for the maintenance of your solar photovoltaic system. It prevents PID-related problems and restores the efficiency of your system.